Founded in 1999, AdEase is a marketing, advertising and public relations agency headquartered in San Diego, with offices in Los Angeles and Northern California. Our fully integrated, cross-cultural campaigns leverage both online and offline marketing channels.

OUR PICK – THIS MONTH’S OUTSIDE-THE-BOX CREATIVE

DHL SHOWS HOW TO MAKE COMPETITORS ADVERTISE YOUR BRAND

Shipper DHL got competitor companies such as UPS to deliver large packages with the words “DHL is faster,” on the outside. How did they do it? Out-of-box thinking. The boxes were black and covered with a temperature-activated ink that became visible as they warmed up in the back of the delivery trucks in the dead of winter. Take a look.

According to a recent national survey of CMO’s released by Duke University’s Fuqua School of Business, brand marketers plan to double their budgets allocated to social media. Additionally, respondents said they plan to dramatically increase their spending on marketing analytics, boosting their budgets an average of 72%.

MAJOR FOOD BRANDS TO POUR COST SAVINGS BACK INTO MARKETING

Discussion at the recent Consumer Analyst Group meeting in New York City centered around major food brand efforts to cut costs and operate more efficiently. The good news for the agency world is that most of the CEO’s who presented at the conference, from brands such as Kellogg’s, Kraft and Mondelez, pledged to route cost-savings back into building their brands via advertising and marketing, with a strong emphasis on digital as a way to spread their message more efficiently.

MOBILE A GREAT WAY TO REACH AFRICAN-AMERICANS AND HISPANICS

As highlighted in a recent VMI Multicultural Marketing Report, 60% of Hispanics and 43% of African-Americans use their mobile phone as their primary device for accessing the internet. These numbers haven’t gone unnoticed by advertisers who have increased mobile spend towards African-Americans by 303% and 195% towards Hispanics.

A new report from EC Hispanic Media reveals that discounts and promotions are bigger Facebook “like” motivators than content. While these advertising platforms are still evolving, the U.S. Hispanic market has flocked to social media and companies with the right information have a great opportunity to see a large impact and return on their ad dollars.

Cheerios first ad featuring a biracial couple, the father an African-American and the mother Caucasian, made headlines for the racist response it generated towards the interracial couple. The new ad, which debuted during the Super Bowl, has not been immune to the controversy. In the spot, the couple’s 6-year-old named Gracie, sees the opportunity of a new baby brother or sister as room for negotiation. Both TV spots were a bold move for Cheerios and reflect the ever-evolving make-up of today’s modern families.

The recent Covered California TV ads have fallen short in a number of areas when delivering the health coverage message to Hispanics. In addition to ending the spots only with a web address and not a phone number or physical address, which is key for Hispanics when making important decisions such as health insurance, the biggest mistake was simply translating ads developed in English for a general audience into Spanish. The message “Welcome to a new state of health. Welcome to Covered California” is somewhat confusing in Spanish and much less impactful than when said in English.

HISPANICS SOON TO BE THE LARGEST RACIAL / ETHNIC GROUP IN CALIFORNIA

According to the Pew Research Center, California’s demographers project that by mid-2014, the state’s residents will be 41.5% Hispanic, 38.8% white non-Hispanic, 13% Asian American or Pacific Islander, 5.8% black non-Hispanic and less than 1% Native American.

According to a recent comScore Search analysis of the U.S. search marketplace, Google sites led all others with a 67.6% market share, followed by Microsoft with 18.3%. Yahoo sites came in third with 10.4%, Ask Network accounted for 2.4% of explicit core searches and AOL came in fifth with 1.3%.

After an extensive agency review, AdEase was selected as the Strategic Marketing Partner for the California Earthquake Authority (CEA). The CEA is a publicly managed, largely privately funded organization that provides catastrophic residential earthquake insurance and encourages Californians to reduce their risk of earthquake loss. Scope of work will include marketing strategy, creative services, public outreach and media buying for general market as well as multicultural. AdEase has partnered with Burson-Marsteller to manage public relations/public affairs for the account. The $9 million annual contract will run through 2019. 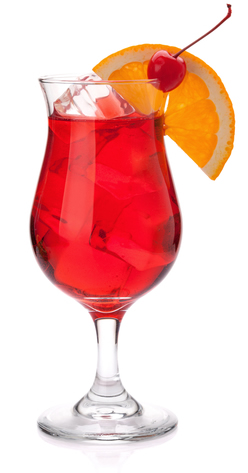 You don’t have to be in New Orleans to enjoy the local libations that Fat Tuesday has to offer. Make your own Mardi Gras right at home with this classic Southern delight. But be careful. It’s strong enough to leave a trail of devastation. In honor of Mardi Gras, here’s your Hurricane recipe:

Directions: Fill a 16 oz. glass with ice. Pour in amaretto, light rum and dark rum. Pour in orange juice, pineapple juice and lemon juice. Stir, then top with a dash of grenadine and garnish with an orange slice and cherry. Cheers!